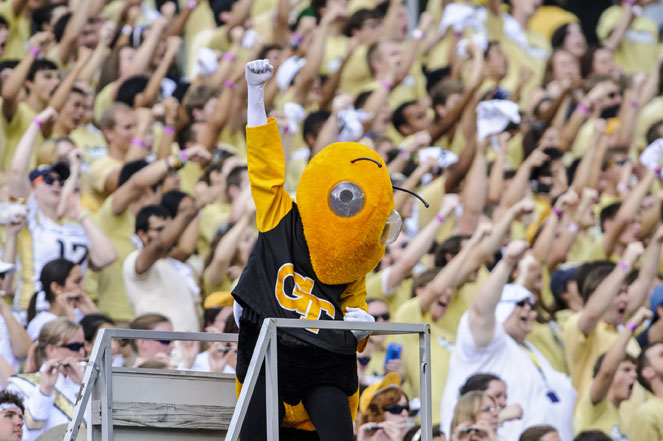 Originally released in 1919, Up With the White and Gold is one of Georgia Tech’s two fight songs. Written by Frank Roman, the song pays homage to Tech’s school colors, old gold and white. The lyrics are as follows:

Up with the white and gold
Down with the red and black
Georgia Tech is out for a victory
Well drop a battle axe on georgia’s head
When we meet her our team is sure to beat her
Down on the old farm there will be no sound
‘Till our bow wows rips through the air
When the battle is over georgia’s team will be found
With the Yellow Jacket’s swarming ‘round! Hey!

Having evolved from the folk song “The Sons of the Gamboliers,” the first version of this Georgia Tech fight song became an official fight song in 1905 and first appeared in the Tech’s yearbook – the Blueprint – in 1908. The first version of the song was written by Michael Greenblatt, the Institute’s first bandmaster, but was re-arranged for the band by his successor, Frank Roman. The song has become extremely famous over the years, so much so that Richard Nixon and Nikita Khrushchev sang it together in 1959 at their meeting in Moscow. The lyrics of the song are as follows:

Oh, if I had a daughter sir, I’d dress her in white and gold
And put her on the campus, sir, to cheer on the brave and bold
And if I had a son, sir, I’d tell you what he’d do
He would yell “To Hell With georgia” like his daddy used to do

Oh, I wish I had a barrel of rum and sugar three thousand pounds
A college bell to put it in and a clapper to stir it around
I’d drink to all the good fellows who come from far and near
I’m a ramblin’ gamblin’ hell of an engineer! Hey!

With music arranged by Frank Roman and words by I.H. Granath, the lyrics to Georgia Tech’s Alma Mater, Scion of the Southland are as follows:

Oh sons of Tech arise behold
The banner as it reigns supreme
For from on high the White and Gold
Waves in its triumphant gleam,
The spirit of the cheering Throng
Resounds with joy revealing
A brotherhood in praise and song
In memory of the days gone by
Oh, Scion of the Southland
In our hearts you shall forever fly!
We cherish thoughts so dear for three
Oh Alma Mater in our pray’r
We plead for you in victory
And in the victory we share,
But when the battle seems in vain
Our spirit never falters
We’re ever one in joy and pain
And our union is a lasting bond;
Oh may we be united
Till the victory of life is won!

One of the most popular traditions at Georgia Tech is the Budweiser Song. The song was at one point played multiple times through football games, but is now played between the 3rd and 4th quarters of every football game – taking the place of the song Dixie. It was originally written by Steve Karmen and became popular after it was heard in a Budweiser commercial. During the song, it is tradition for all the Georgia Tech fans to bob up and down throughout the song.

At the end of every sporting event where the band plays, the event is ended with a playing of “The Horse”. Students often stay afterwards to dance to the song. Between the first and second verses of the song, all of the fans and the band members spread out throughout the stadium and dance again in their new spots to the second verse.