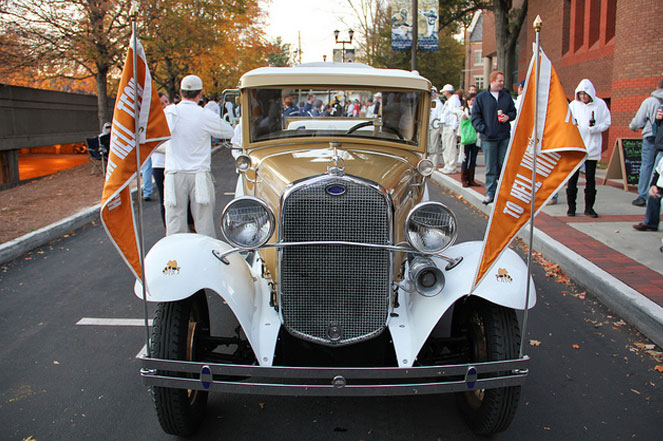 The Ramblin’ Reck is Georgia Tech’s one-of-a-kind mechanical mascot – a 1930 Ford Model A Sport Coupe that truly embodies the spirit and character of both the Institute and the student body. Proudly bearing the school colors of Old Gold and White, this illustrious automobile has led the football team onto the field for every home game since it was introduced against Rice on September 30, 1961. 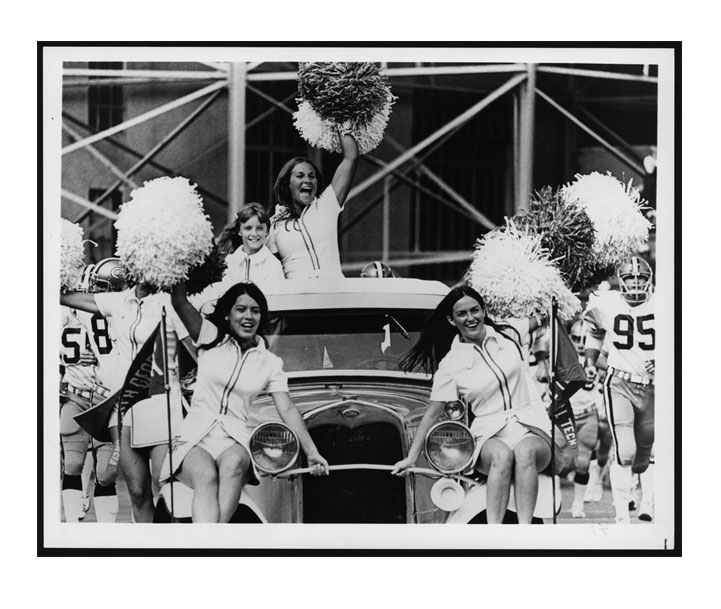 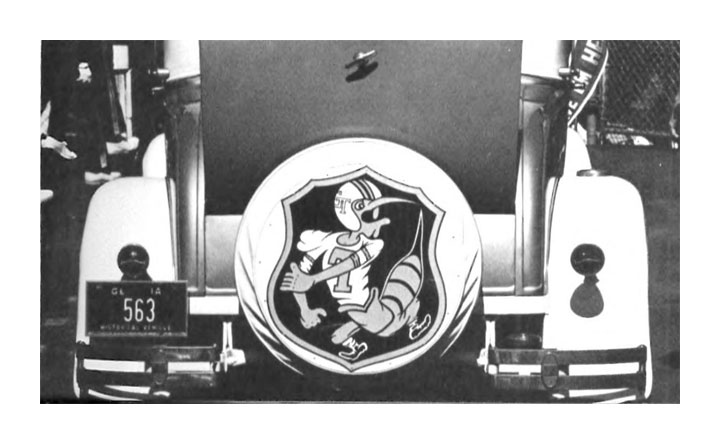 The first mechanical Ramblin’ Reck was a 1914 Ford Model T owned by the Dean of Men, Professor Floyd Field, with a 1926 Technique article bestowing the moniker upon the car. Having been driven daily by Field since 1916, the car had become quite dilapidated – a genuine wreck. Despite its condition, the student body had come to admire Dean Field’s car as much as the man himself, and thus the campus shop overhauled it for him in 1926. Nevertheless, Dean Field traded it in just two years later for a newer Model A.

As a memorial to the first Ramblin’ Reck, the Technique sponsored an automobile race from Atlanta to Athens known as the Old Ford or “Flying Flivver” Race. The race was only run twice in 1929 and 1930 before being deemed too dangerous, and in 1932 it was transformed into the annual Ramblin’ Wreck Parade that continues to this day. Throughout the 1940’s and 1950’s, these old cars remained immensely popular on Tech’s campus, despite the fact that most were shoddy, beat-up, and only kept alive by the engineering prowess of their student drivers. It was essentially a rite of passage to own a Ramblin’ Reck. Dean of Students Jim Dull saw this passion as representative of both the student body and Tech’s engineering heritage and set out on a quest to find a pre-World War II Ford to serve as the Institute’s official Ramblin’ Reck mascot.

After years of searching, the perfect vehicle appeared in the fall of 1960 as if by fate. Upon arriving back at his apartment in Towers Dormitory one Saturday afternoon, Dean Dull discovered an immaculately-restored black and gold 1930 Ford Model A Sport Coupe. The car belonged to Ted Johnson, Chief Pilot for Delta Air Lines, and his son Craig. The two had just finished restoring the car as a father-son project, and when asked about selling it, the response came quickly: “Nothing doing.” Nevertheless, Dean Dull persevered for several months until finally on May 26, 1961, Johnson agreed to sell the Model A for $1,000, an unbelievably low sum which he would eventually return to the Institute in 1983 to make the car a true donation.

On September 30, 1961, the Ramblin’ Reck rolled onto the field for its first ever football game driven by Dekle Rountree, Chairman of the Student Council Reck Committee. At midfield, Don Gentry, President of Ramblin’ Reck Club, introduced the newly acquired mechanical mascot to a crowd of 43,502. Tech shutout Rice University 24-0, and the Ramblin’ Reck subsequently took its place in the hearts of thousands. Over the years, the Ramblin’ Reck has traveled far and wide as an ambassador of Tech spirit. Today, the Ramblin’ Reck is transported by truck and enclosed trailer, but it was not always done this way. In fact, during 1961, it made its first voyage to Auburn via freight train. For several seasons thereafter, the Reck never missed a home or away game, traveling as far north as Notre Dame and Michigan and as far west as El Paso. In 1990, the Reck made one of its longest journeys ever – traveling to Denver with the Yellow Jacket Basketball team for their first Final Four appearance. Just months later, it accompanied the football team to the Citrus Bowl in Orlando, where the team won its most recent National Title.

Along the way, the Reck has been the target of many attempts of theft and vandalism. An Auburn fan once went so far as to use a rifle to shoot a hole in the radiator from his dorm room window. One of the most famous incidents in the Reck’s history occurred in 1963 while the Reck was being stored overnight in Neyland Stadium. Tennessee students broke into the garage, painted the car orange, and tore the soft top apart. Despite their assurances of the car’s safety, Tennessee’s Athletic Department provided little help afterwards, undoubtedly because they were still sulking about Tech’s 23-7 victory.

Recently, there has been a lot of confusion about the spelling of the Reck. Does it start with a W or an R? Students at Georgia Tech call themselves Ramblin' Wrecks with a 'W'. Since it's purchase by Dean Dull in 1960, the car has historically been spelled with an 'R'. Reck Club continues to maintain this tradition.

The Reck leads the football team onto the field (1981).
Source: The Blueprint '82

The original caretakers of the Ramblin’ Reck were the members of the Student Council Reck Committee, but as the traditional enforcement of RAT Rules became highly discouraged, Ramblin’ Reck Club was in need of more “wholesome” activities. By 1967, the keeping of the car had been entrusted solely to Ramblin’ Reck Club on behalf of the entire student body. Maintenance of the car was performed at the local Hapeville Ford Plant through the generosity of plant manager and Tech alumnus, Pete George (IE ’47). George, sometimes known as the “Godfather of the Reck,” oversaw at least three major restorations of the car, including the 1973 re-painting of the Reck from its former cheddar gold to its current color scheme, using a new Lincoln gold handpicked by Bobby Dodd himself.

By 1992, both Pete George and Dean Dull had retired, and the Hapeville plant subsequently ended its relationship with the Ramblin’ Reck in 1994. These events left Ramblin’ Reck Club with complete responsibility for the mascot. Since that time, all scheduling, maintenance, repairs, and financial support of the Reck has been managed by the club and the annually elected Reck Driver, who serves as the primary caretaker of the one and only Ramblin’ Reck. On June 15, 2007, the Ramblin’ Reck was in an accident while being towed to an appearance. The incident left the entire body disfigured and the roof destroyed. With only 85 days before Tech’s home opener, there was little hope for the repairs to be completed on time. However, due to the help of countless members of the Tech community and the hard work of the club, the Ramblin’ Reck successfully led the team onto the field for its 292nd consecutive home game on September 8, 2007. Two minutes and thirty seconds before kickoff, the Ramblin’ Reck burst out of the tunnel to the pleasure of 43,288 screaming Yellow Jacket fans. 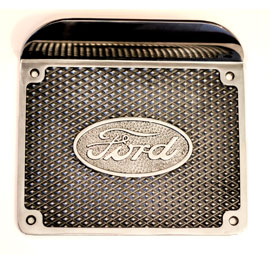 Seniors of the Ramblin' Reck Club receive a running board from the Reck upon graduation from the Institute.